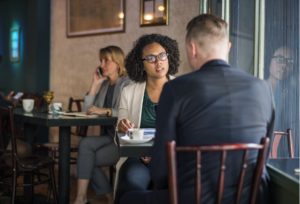 Approaching differences without an open mind

It might be hard to admit, but we’re all a little stubborn and set in our ways. Many people believe that compromise is a huge factor in successful relationships, and you can’t compromise without first approaching your partner with an open mind. At the start of your relationship, you will be two different people who might have had completely different upbringings. This doesn’t mean that your relationship won’t work out, it only means that you must seek to learn about your partner. Maintaining an open mind and honest communication allows couples to validate each other’s differences and grow together.

Relationships can be frustrating, especially when someone has a hard time breaking a bad habit or harmful pattern. But, when trying to address these repetitive behaviors, it’s best to avoid making universal statements. These include examples like, “you always do this” or “you never do that.” When you use this kind of language, you are communicating to your significant other that they are nothing more than their flaws. Because these types of statements point out what is wrong as opposed to how to be better, they discourage change and will elicit a defensive response. It is much more effective to gently point out how someone might do something differently rather than the way in which they’re doing it wrong.

Invalidating someones feelings can be a harmful practice that usually ends up causing communication barriers. When someone tells you how they feel and you tell them they are overreacting, you are invalidating their feelings. Another example would be if someone is feeling good about something that you don’t consider to be a big deal and you tell them as much, you are diminishing their feelings. This type of communication is harmful because it can cause instant resentment. When you hurt someone who has trusted you in this way, they could have a hard time trusting you again in the future, and that is a communication barrier that could take a lot of work to break through.

Sometimes it feels like the best thing to do in a relationship is avoid confronting a certain issue because causing a fight might escalate things. There are certain times when it can be prudent to choose to address something at a later time but it’s important to actually address the issue because by simply ignoring a problem and hoping it will go away is unfair to you and to your partner. When you bottle up your frustrations, they might manifest themselves as passive aggression or lack of intimacy. This breach in communication could be keeping you and your partner from working through things in healthy way and strengthening your relationship.

How to communicate better

This may sound counter intuitive, but instead of focusing on how to communicate better, focus on each other. When your partner is talking to you, remain engaged mentally. Listen to what they’re saying with the intent to better understand them, not with the intent to defend yourself or some up with a rebuttal. Pay attention to their body language, read between the lines of what they’re not saying. And most of all, ask questions. By seeking to understand one another, you will face issues together rather than against each other. For more information on positive communication habits, a therapist might be a good idea.